How Can Aspartate Aminotransferases Be Exploited In Biocatalysis

How can Aspartate Aminotransferases be Exploited in Biocatalysis?

Aminotransferases (transaminases) are very useful in pharmaceutical drug discovery because of their ability to introduce chirality into amines or amine derived compounds. Aspartate aminotransferase catalyses the reversible transfer of an alpha amino group between aspartate and glutamate. A well-known example of aminotransferases in the industry would be the commercial antidepressant Zoloft® (sertraline). The majority of major drugs contain amines or functional groups derived from amines. Aminotransferases can be used to get access to chiral amines in three ways: kinetic resolution, asymmetric synthesis and deracemisation. Aminotransferases are widely applied as biocatalysts to synthesise chiral amines using prochiral ketones as the building blocks. One key focus area could be asymmetric synthesis of a chiral amine from a prochiral ketone. Attention will have to be paid as to which stereoisomer will have the desired function and select for that stereoisomer however aspartate aminotransferases in particular are useful here due to their enantioselectivity. If this proves successful a mutant library could be generated and screened for functionality of the genes encoding the produced chiral amine. The active site of the enzyme contains pyridoxal phosphate (PLP) attached by Schiff base linkage with Lysine-258 (Figure 1) and the Argenine-386 residue in the active site helps orientate substrates by binding to their α-carboxylate groups (Hwang et al., 2005).The active site of aspartate aminotransferase contains a small and large binding pocket (Figure 2) so wild type enzymes are restricted to ketones with at least one small substituent attached e.g. a methyl or ethyl group (Gomm and O’Reilly, 2018). This is a common feature of all aminotransferases and limits the biocatalytic ability of these enzymes. There have been extensive efforts made to increase the size of the small binding pocket so that binding of ketones with two large substituents can bind with the enzyme. The most famous example this was in 2010 when the rhodium catalysed hydrogenation step in the production of sitagliptin® was replaced by an evolved (R)-selective ω-aminotransferase in order to convert a bulky ketone into the sitagliptin® drug (Gomm and O’Reilly, 2018). 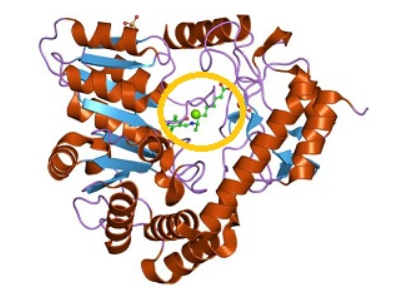 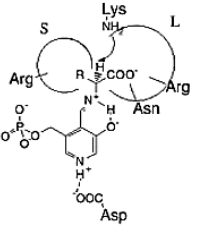 Figure 2: Schematic diagram of the AspAT active binding sites. The carboxylic group of the substrate is stabilized by arginine and asparagine in the small binding pocket and the pyridoxal ring of the cofactor PLP is stabilized by aspartate (Hwang et al., 2005).

Aminotransferases themselves have many advantages over other systems in being able to produce unnatural amino acids and chrial amines which are key intermediates or building blocks for use in the biotechnology industry for drug production due to the fact that they do not require an external cofactor to be added, they have high enantioselectivity, broad substrate specificity and are stable with high reaction rates (Taylor et al., 1998). Aspartate aminotransferase in E. coli (encoded by the aspC gene) is one of the most commonly employed L-α-Amino acid aminotransferases (LAT’s) used in whole cell systems to be cloned and overexpressed for industry use. Figure 3 below shows one example of an unnatural amino acid produced by aspartate aminotransferase via a transamination reaction. 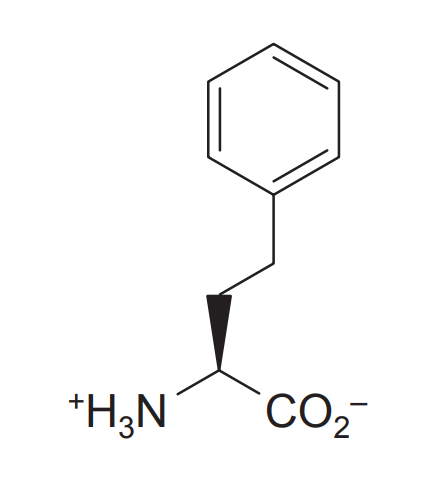 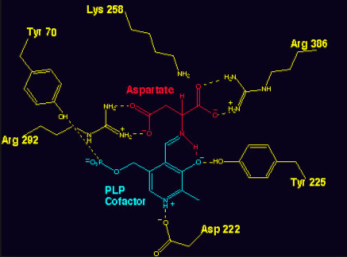 Figure 4: Schematic diagram of the active site residues in aspartate aminotransferase (shown in yellow) interacting with the substrate aspartate (shown in red) and the PLP cofactor (shown in blue) (Mcb.berkeley.edu, 2019).

Based on work carried out by Onuffer and Kirsch where they redesigned the substrate specificity of E. coli aspartate aminotransferase to E. coli tyrosine aminotransferase using homology modelling and site directed mutagenesis. My proposed work would be to redesign substrate specificity of E. coli aspartate aminotransferase to E. coli tryptophan aminotransferase in the hopes of increasing catalytic activity in the mutant tryptophan aminotransferase compared with the parent for potential use as an auxin biosynthetic to increase the grain yield of wheat (Shao et al., 2017). Use as an auxin biosynthetic has already been established but the hopes of this work would be to increase the performance of the enzyme i.e. catalytic activity, so that it can be more efficient for this use. After using a sequence alignment program (MEGA 7.0) it was revealed that aspartate aminotransferase and tryptophan aminotransferase have a sequence similarity of 64.3% which is quite high considering that Onuffer and Kirsch did this type of work, as described above, with 43% sequence similarity. Directed evolution starts off with an enzyme with similar properties to the desired enzyme so in this case we start off with aspartate aminotransferase and the desired enzyme is tryptophan aminotransferase. Then random mutations are introduced to the gene encoding the starting enzyme aspartate aminotransferase using taq polymerase in a process called error-prone PCR (EP-PCR). No primers are used in this process unlike the conventional PCR method and the DNA fragments generated are recombined leading to the gene being reconstructed. The error-prone PCR process will run for approximately 30 cycles to generate a large enough mutant library to find the desired traits. To increase rates or errors manganese ions, excess dGTP, excess dTTP and nucleoside TP analogs are added to the reaction mixture. In the past site-directed mutagenesis may have been used do generate mutations, in fact this is what Onuffer and Kirsch did to achieve similar outcomes. However, error-prone PCR can generate an infinite amount of variants whereas site directed mutagenesis is limited to just 20 variants and this is partly why site directed mutagenesis is used very rarely in biocatalysis today (Bornscheuer and Pohl, 2001). The different versions of the mutated gene are then inserted into a bacterium vector (E. coli) which can then produce the slightly different enzymes. The major benefit of this process is that we don’t need to screen all the mutants as it is assumed that all positive mutations are additive, therefore we can screen 1000 mutants and test and select the best 10-15 with the required phenotype (in this case, tryptophan aminotransferase related genes that will function in the tryptophan-dependent pathway of auxin biosynthesis). We can then discard our original parent enzyme and work with our mutants by beginning the error-prone PCR process again for another four cycles. Gene shuffling tells us that by doing only four cycles i.e. 4 generations we can achieve >98% f theoretical optimal fitness (Allen, 2018). Based on readings it should be possible that through the above methods that just one of the mutants in the library produced will have increased catalytic activity for tryptophan aminotransferase in the tryptophan-dependent pathway of auxin biosynthesis which could have the potential in industry to increase the grain yield of wheat (Shao et al., 2017).

Therefore my above suggestion for directed evolution to generate a mutant tryptophan aminotransferase enzyme should fit these considerations if it is to be successful. The desired function of the enzyme we already know will be possible as we are trying to produce a mutant of an existing enzyme with the function already in use and proved to be effective. We can say that the above proposals desired function is possible. We then look at the second consideration where the development of this function should be biologically possible. Rothman and Kirsch in 2003 used directed evolution with aminotransferase enzymes, specifically aspartate aminotransferase and tyrosine aminotransferase. This work had similar aims as the above proposal as they wanted not to find a new enzyme but find a closely related tyrosine aminotransferase mutant that would have similar catalytic properties to the existing wild type tyrosine aminotransferase. Based with the success of this work I think the development of the proposed function should be biologically possible. The third consideration is that mutant libraries of sufficient complexity are generated. The proposal above should easily meet this requirement because in error-prone PCR we use the following equation to calculate the number of variants in the mutant library: 20n where n= the number of amino acids in the chain; in this case aspartate aminotransferase has 403 amino acids in its chain so the number of variants is calculated by: 20403. This massive number means this mutant library will definitely be sufficiently complex.