Women have played pivotal roles in science and mathematical fields. Yet, women have always been underrepresented and under paid in Science, Technology, and Engineering and Mathematics fields (STEM). Using various studies performed independently and by the U.S. government, this paper will examine wage and gender inequalities. The research will show that gender and income inequality exists and will look at contributing factors and ways to improve women’s involvement in STEM. Improving women’s status in STEM fields is an ethical dilemma that must be remedied for the greater good. 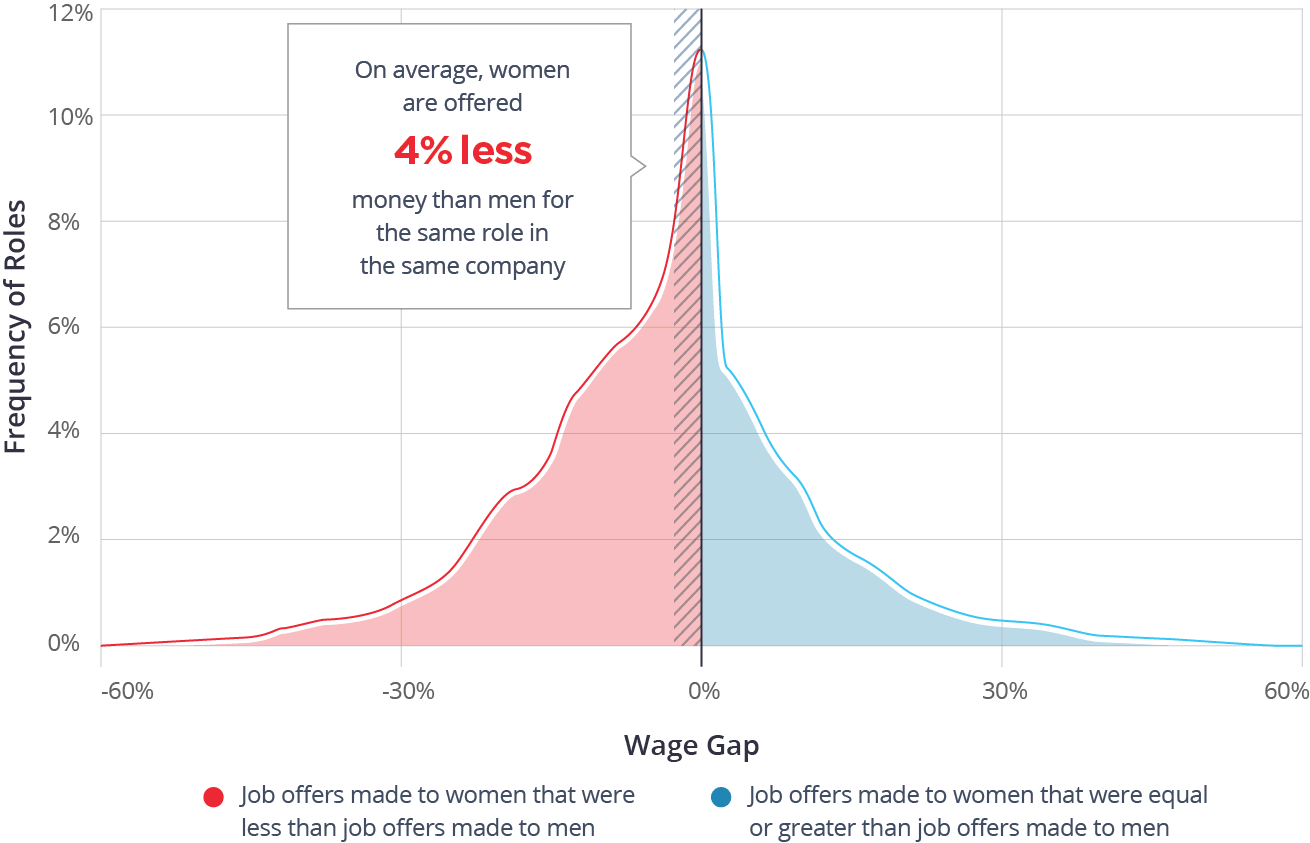 Today, women make up more than one third of the employee’s at NASA but this hasn’t always been the case. The first women to break NASA’s gender barrier happened in 1922. Pearl Young was hired as an engineer and progressed into the chief technical editor for the National Advisory Committee for Aeronautics. In 1960, Katherine Johnson coauthored the Determination of Azimuth Angle at Burnout for Placing a Satellite Over a Selected Earth Position report. This was the first time a women received credit for a research report. She then worked as a trajectory analysis for the first human spaceflight Freedom 7 in 1961. (Atkins, 2015)

There are many examples throughout history where women have not been recognized as equals in many facets of life. Today, in the 21st century, society’s view have drastically changed and yet still, there are inequality between the sexes. Independent research shows that just about 24% of women make up the workforce in STEM fields. Additionally, the data suggests that women in STEM fields will decline to 22% by the year 2025. Women’s salaries in the tech sector, on average, are offered 4% less than their male counterpart for the same job with the same company. The study also revealed that women are offered less pay than men on average 63% of the time. (”Cracking the Gender,” 2016)

Do traditional stereotypes of men being better than women in the math, sciences or technology portray an accurate assessment? Do societal norms impede girls from succeeding in the sciences or keep women from seeking future careers in STEM fields? Research will demonstrate how societal norms have negatively impacted girls from studies in the sciences and ultimately limiting women from delving into STEM fields. Additionally, research will demonstrate how effective encouragement efforts and recruiting improvements can improve women’s representation in tech fields and close the wage gap.

The wage gap is defined as the difference between the earnings of men and women. Women make less than men in virtually all occupations in the United States. The Current Population Survey reported that the median earnings for a full time employment salary was $52,146 for men and $41,977 for women. (CPS, 2018)

According to U.S. Census data for STEM occupations with a median salary of ≥$75,000, women make 89 cents on every dollar made by their male counterpart. In the United States, women represent a minority of less than 24% in STEM fields. The overall representation of women in STEM is exacerbated by the substantial gender gap in engineering and computer occupations. In 2016, women represented 25.5% of computer and mathematical jobs and 14.2% of architecture and engineering occupations. Women are also significantly underrepresented in other high tech jobs such as software developers 20%, computer net architects 9.7% and aerospace engineers 7.8%. (CPS, 2018)

Within the United States, one would think that equality before all rings true. Unfortunately equality is not truly equal and will require major efforts to impact change of bias between men and women. Gender biases are passed along generations and are cemented early on in childhood. This type of bias is called implicit. Implicit bias, also known as implicit stereotype or implicit social cognition, “refers to the attitudes or stereotypes that affect our understanding, actions, and decisions in an unconscious manner.  These biases, which encompass both favorable and unfavorable assessments, are activated involuntarily and without an individual’s awareness or intentional control.” (Understanding Implicit Bias, 2015)

Boys are expected to be good at constructing and sports, girls should be nurturing and loving. Implicit bias is a major factor influencing chosen fields of study and therefore career selection. The U.S. workforce is made up of 160 million full and part time employment. According to the U.S. Bureau of Labor Statistics, men make up more than half the workforce with 53 percent and women with 47 percent. Women represent almost half of the workforce but do so in very different occupations. Women tend to work in education, office/administration and health care. Men on the other hand represent the majority in construction, maintenance/repair, software developers, application and system software. (Median Earnings, 2017)

The data provides evidence that there is a problem, women in STEM are underpaid and underrepresented. There are so many factors and variables that are at play which make it difficult to pinpoint one specific reason for gender inequality. However, implicit bias is a major factor. Understanding implicit bias and its role is crucial in solving the problem by introducing initiatives for improvement.

Education is paramount. Educating girls by building a strong foundation in science, technology, engineering and math is essential. The National Center for Education Statistic records a Digest of Educational Statistics which tracks a variety of education parameters and achievements. Since 1990, boys and girls have scored similarly in elementary standardized testing in math and science. Consequently, by high school, both genders score similarly during testing. However, in high school, girls demonstrate a disinterest in math and science and this trend continues into college. (Digest of Education, 2017) 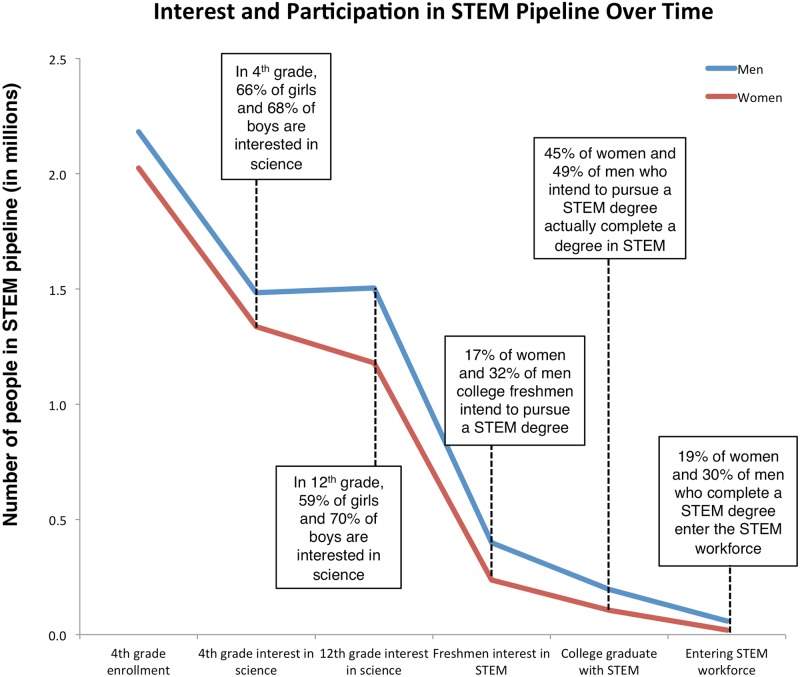 Educators need to find ways to encourage and create an interest for girls in math and science throughout elementary, middle and especially high school. “While achievement in an area often contributes to interest, beginning in young adolescence and increasingly as girls and boys move through middle school and high school, boys tend to express more positive attitudes toward and interest in STEM subjects than girls do.” (Corbett & Hill, 2015)

There is a need for more programs and legislation that encourage women to go into the STEM fields. Nonprofit organizations the likes of Girls who Code, National Girls Collaborative Project and Women in Engineering Proactive Network help provide support and direction to improve women’s involvement in STEM. Federal bill H.R.3137, Promoting Women in STEM Act is a proposed amendment to the Technical Education Act of 2006 that will require states to include supporting programs that increase the participation of women in STEM. (Promoting Women in, 2017) President Donald Trump recently signed two bills into law, the Inspire act and Promoting Women in Entrepreneurship Act. Both laws encourage girls and women to enter STEM fields. The president while signing the laws was quoted for saying, “It’s not fair and it’s not even smart” referring to the low percentage of women in STEM. (“whitehouse.gov,” 2017)

Gender inequality is an ongoing problem and presents an ethical dilemma. Women in STEM are underpaid and underrepresented. Societal norms and implicit bias are major factors that contribute to the inequalities. Data clearly represent that men and women perform similarly in math and science but significantly less women pursue education in STEM.

The U.S government has recognized the shortage of women in STEM and have passed legislation to help close the gap. Additionally, private corporations and educational programs also need to improve their efforts to narrow the STEM gender gap. Schools must create programs to increase and promote girls into STEM studies. Corporations should employ a more inclusive corporate environment and recruit, retain, and advance women in STEM. Closing the gender gap can also reduce the pay gap by leveling the playing field.

Addressing cultural norms and implicit bias is the first step to correcting inequalities, although it will take a multi front effort. Improving corporate behavior and implementing supporting legislative policy will help do away with this social, ethical and economical dilemma.  It will take the strongest efforts that will require individuals, employers, and policymakers to end underrepresentation and pay inequalities in STEM for the benefit of women, their families, and society.